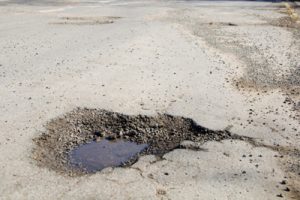 Sinkholes are a terrifying and catastrophic phenomenon found throughout the globe.

Sinkholes are a terrifying and catastrophic phenomenon found throughout the globe. They open up suddenly, swallowing cars, people, and anything on the portion of road above them. While these holes seem sudden, they take years to form and can be detected using GPR. So, what exactly causes sinkholes and how can you prevent them from occurring?

Sinkholes can arise through natural causes or man-made causes. They occur naturally due to gradual erosion or water that has slipped through the pavement and made its way underground. They start developing years and years before they ever make themselves known. The pavement that we walk on every day is composed or dirt, rocks, and minerals. Water is constantly seeping into the ground and pavement to enter reservoirs deep below the surface. Over time, this water erodes the rocks and minerals and creates huge gaps. Once the structure has nothing to stand on due to the massive reservoir and erosion, it will collapse into a sinkhole.

The Three Main Types of Sinkholes

There are three core types of sinkholes known today:

These holes are common in places with a thin layer of soil, so the bedrock is constantly exposed to water and erosion. Solution sinkholes are typically bowl-shaped and can be very large in size. Occasionally, solution sinkholes gradually reveal themselves over time instead of suddenly collapsing.

This sinkhole variety occurs when bedrock is covered by a whole lot of soil and dirt. As the bedrock erodes, cracks start to form and weak points are created all around. Eventually, the weak points form into a large sinkhole. Cover collapse sinkholes typically collapse in an instant and create massive holes.

This type of sinkhole is made over a long period of time. Bedrock isn’t well integrated with the soil and covering materials, so clay and sand fill the bedrock holes as it wears away. The cavity creating these holes is actually on the surface of the soil, not underneath it.

Concrete Visions has over 12 years of experience and expertise in concrete scanning and we know how to detect any problems lurking beneath the surface. We use ground penetrating radar accurately and expertly and are familiar in many other methods that can be used when appropriate like concrete x-ray and electromagnetic conductivity. We are also very familiar with the latest construction safety techniques and train all of our workers to do their work quickly, accurately, and safely.  If you would like to learn more about how we can help you, give us a call at (410) 766-2210 or visit us online. For more articles and tips, follow us on Facebook, Twitter, LinkedIn, and Google+.

Categories: Blog, Concrete, Ground Penetrating Radar, and Sinkhole and Void Detection | Tags: Blog, sinkhole and void detection, and sinkholes
This entry was posted on Friday, January 6th, 2017 at 10:37 am. Both comments and pings are currently closed.