How to Prevent Sinkholes 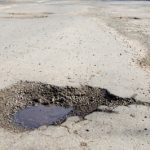 Learn how to prevent a sinkhole properly.

Sinkholes are a major issue that plague cities throughout the globe. A single sinkhole can require extensive costly repairs. Prevention is key to stopping the havoc that sinkholes can cause, and GPR scanning is one of the best ways to detect sinkholes early on in the formation process. How can you stop sinkholes from ripping a hole in your street?

Urban areas are at a higher risk of sinkholes since many underground utility systems deteriorate over time due to poor maintenance and a lack of infrastructure support. Old sewer pipes and aging sewer mains are the most common causes of urban sinkholes. They form by water slowly leaking over time into the surrounding area. This area becomes unstable and hollow due to erosion. As heavy vehicles drive over the surface and construction occurs around the area, the ground and the matter below it become weaker and weaker. Once a significant section of pipe collapses, a sinkhole could occur.

GPR scanning can be used to detect early sinkhole formations so that municipalities have a chance to repair or replace pipes before a sinkhole occurs. The cost of stopping traffic on a busy day and digging up sewer lines is much lower than the cost of restoring an entire city block that was swallowed up by a sinkhole. Preventative maintenance is vital to stopping the disaster that a sinkhole can be.

Identifying Sinkholes on Your Property

Identifying sinkholes is a possibility if you know what to look for. Some of the most common signs of sinkholes include:

Concrete Visions has over 12 years of experience and expertise in concrete scanning and we know how to detect any problems lurking beneath the surface. We use ground penetrating radar accurately and expertly and are familiar in many other methods that can be used when appropriate like concrete x-ray and electromagnetic conductivity. We are also very familiar with the latest construction safety techniques and train all of our workers to do their work quickly, accurately, and safely.  If you would like to learn more about how we can help you, give us a call at (410) 766-2210 or visit us online. For more articles and tips, follow us on Facebook, Twitter, LinkedIn, and Google+.

Categories: Sinkhole and Void Detection | Tags: GPR and sinkhole prevention
This entry was posted on Monday, February 5th, 2018 at 10:37 am. Both comments and pings are currently closed.