Standing the Test of Time: The History of Concrete 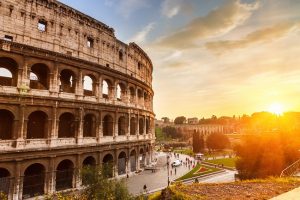 Let’s dig deep and see why concrete has reigned supreme in the world of construction for thousands of years.

The history of concrete might not be something you think about on a daily basis, but it is, unquestionably, part of your daily life. It is a large part of contemporary construction, as it is used for all kinds of infrastructure, commercial, and residential buildings. Whether you realize it or not, the significance of concrete as a construction material dates all the way back to antiquity. Concrete has been used for thousands of years because of its versatility and strength. Some of the most ancient structures in the world are still standing because they were built with concrete. Let’s dig deep and see why concrete has reigned supreme in the world of construction for thousands of years.

Concrete was invented, believe it or not, thousands of years before Christ. In the United States, our concrete structures are relatively new, so it’s hard to imagine that concrete is that ancient an invention. Concrete, however, is easy enough to produce when you have the correct ingredients and tools. Archaeologists point to the Ancient Egyptians as the inventors of the material. Around 3000 BC, Egyptians used concrete-like materials to construct the famous pyramids, all of which are incredible architectural wonders of the world.

We are all familiar with the Ancient Roman ruins that are still very much intact today. The reason these amazing architectural works of art are still standing is because they are made, solely, out of concrete. Even at 2000 years old, the Pantheon and Coliseum are parts of the Roman cityscape.

Our uses for concrete have very much stayed the same. Concrete is the most-used material in American infrastructure. To think that concrete is just as important to us in 2018 as it was to the Ancient Egyptians is mind-blowing. The concrete structures and roads we have in the United States withstand extreme conditions and heavy traffic. For these reasons, concrete is here to stay.

Concrete Visions has over 12 years of experience and expertise in concrete scanning and we know how to detect any problems lurking beneath the surface. We use ground penetrating radar accurately and expertly and are familiar with many other methods that can be used when appropriate, like concrete x-ray and electromagnetic conductivity. We are also very familiar with the latest construction safety techniques and train all of our workers to do their work quickly, accurately, and safely.  If you would like to learn more about how we can help you, give us a call at (410) 766-2210 or visit us online. For more articles and tips, follow us on Facebook, Twitter, LinkedIn, and Google+.

Categories: Concrete | Tags: concrete, concrete tips, and history of concrete
This entry was posted on Friday, April 13th, 2018 at 10:57 am. Both comments and pings are currently closed.